Millions of dollars are spent removing graffiti tagging from business buildings and private properties in Australia every year. Millions more are spent cleaning up rubbish which has been illegally dumped or has accidentally flown out the back of moving vehicles.

The cost of this environmental clean-up could be minimised by reducing graffiti tagging, stopping illegal dumping and properly securing ute and trailer loads. The savings made could then be invested back into community youth projects.

Captain Cleanup’s Graffiti and Illegal Dumping Enviro Show is an interactive song and game show which aims to inspire students to think twice about senseless graffiti tagging. Adults will also learn how to avoid fines incurred by illegal dumping by securing ute and trailer loads and using recycling and tip facilities.

During this hour-long show students will participate in the games Rock Art Contest and Ultimate Ute Rally, and learn the environmental song It’s Our Community.

For further information ring the Captain on 0416 089 746 or fill out a booking enquiry information form. 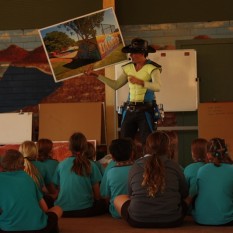